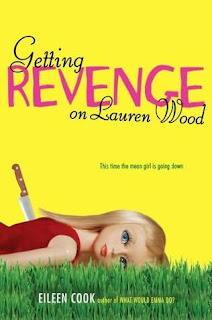 Waiting on Wednesday is hosted by Jill over at Breaking the Spine.

Getting Revenge on Lauren Wood by Eileen Cook.
Release date: January 5th, 2010
Amazon Description: In the final weeks of eigth grade, Lauren Wood made a choice. She betrayed her best friend, Helen, in a manner so publicly humilating that Helen had to move to a new town just to save face. Ditching Helen was worth it, though, because Lauren started high school as one of the It Girls--and now, at the start of her senior year, she's the cheerleading captain, the quarterback's girlfriend, and the undisputed queen bee. Lauren has everything she's ever wanted, and she has forgotten all about her ex-best friend.
But Helen could never forget Lauren. After three years of obsessing, she's moving back to her old town. She has a new name and a new look, but she hasn't dropped her old grudges. She has a detailed plan to bring down her former BFF by taking away everything that's ever been important to Lauren--starting with her boyfriend.
Watch out, Lauren Wood. Things are about to get bitchy.
Revenge, wicked awesome cover, queen bee's, mean girls, more revenge...what more could you want? I really wish it were closer to January...but I have an interview with Eileen to post soon, so keep checking in for that!