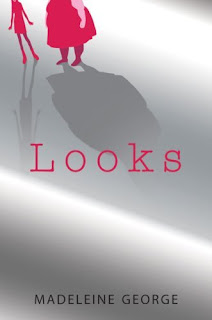 1. Your novel LOOKS deals with invisibility, fitting in, and more. What goes on in Looks, and what was your inspiration behind writing this story?
As a teenager, I was pretty low on the social totem pole, but I was never all the way down and out, never friendless, and I was always curious about the very few kids who seemed invisible--in other words, socially worthless--in my school's social order. So I wanted to write a story about a girl who's fat and genuinely friendless, all the way outside the social hierarchy of her school, and how her life is transformed by becoming friends--even tentative, shaky friends--with another girl on the fringes of her school. It seems to me that the difference between no friends and one friend is a potentially life-saving difference: no friends is a social catastrophe, a dangerous emotional situation, and one friend is a society of two.
2. What are your protagonist's Meghan and Aimee like? What are they dealing with in their school
Meghan is big, awkward, almost completely silent, intensely observant, and very smart. Aimee is tense, emaciated, sarcastic, intensely self-conscious, and very smart. Meghan deals on a daily basis with being bullied by J-Bar, the golden-boy basketball star who's made a hobby out of tormenting her since seventh grade. Aimee's dealing with how much she misses her mom's ex-boyfriend, who taught her everything she knows about writing and who just moved out of their house. Aimee's also dealing with her desire to be embraced by the girls who run the literary magazine at school. They're both struggling to feel seen and also protect themselves from being too exposed, and they're both yearning for connection with other people.
3. What about Cara and J-Bar?
Cara is the editor of the school literary magazine, and apparently perfect; she's pretty and charming and a total overachiever; she's the girl who teachers love, who's friendly with lots of different kinds of kids, who seems to be an all-around wondergirl. It's only when Aimee gets to know her a little better that she sees how fragile Cara's sense of herself is, and what lengths she's willing to go to protect her own self-image as brilliant and special.
J-Bar isn't that deep of a character, to be frank--he's pretty much the villain of the story, and his inner life doesn't really get explored too much in LOOKS. He's just sort of...the bad guy.
4. Do you have a favorite character in Looks? Who/why?
I don't have a favorite character, although I really loved writing the speeches that Mr. Handsley, the beleaguered English teacher, gives. I've been teaching for a long time, and I've always wanted to say many of the things Mr. Handsley says, I've just never let myself say them out loud.
5. How long did it take to write Looks?
LOOKS took me about four years to write. But I would go away from it and come back, go away from it and come back. It's my lifelong goal to write faster--I'm trying to learn how!
6. What do you think about your cover? (Both hardcover and paperback versions)
I love them both. I love the shiny glam hardback cover, and I love the extremely clever graphic paperback cover. The paperback is particularly dear to my heart, because it's not just beautiful but smart: by transforming the letters of the title into bird's-eye views of the two protagonists the designer has managed to evoke the flyover perspective of the opening and closing paragraphs of the book, and has also literally put the characters--who use writing in many different ways in the story-into words. The talented Tony Sahara did both covers, for which he has my undying respect and gratitude.
7. Do you have anything new you're working on?
I'm working on a new book about a girl who's a passionate radical activist, and what happens to her when she realizes she might not be right about everything she fervently believes.
Thank you so much for the interview Madeleine!
-YABQ
Posted by YA Book Queen at 6:15 AM