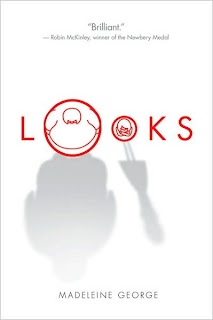 Have you ever felt invisible?
Meghan Ball has. Despite her massive size, she's the most unseen person at Valley Regional High. People say things in front of her--all sorts of things--as if she doesn't exist. And most of the time she feels as if she doesn't.
Until Meghan sees Aimee Zorn. Aimee is as skinny as Meghan is large and as outwardly angry as Meghan is inwardly sad. Meghan instantly recognizes a kindred spirit in Aimee, another person using her body to say what she cannot.
Alone, they are powerless; but together, Meghan and Aimee have the strength to get sweet revenge against the one girl in school who hurt them both.

Review: Wow. I don't even know where to begin, but this novel was fantastic.
Meghan is an outcast, and I really felt her pain. I thought this novel was so true to the horrors of high school, because let's face it, people can be harsh. Whenever J-Bar bullied her, I could see it happening. This novel dives deeply into a lot of issues like anorexia, obesity, betrayal, bullying, isolation, invisibility, I could go on. It felt so real to me.
This novel really changed the way I look at some people, and I'm so glad I read this.
Highlights: When Cara showed her true colors. Okay, that should so not be a good thing, but I was just glad to see it. Sometimes, it's people like Cara who hurt you the most. Also, when Meghan and Aimee joined forces to bring down the one person that hurt them both, and they do not disappoint (I wish I had guts like these girls, but I have a conscience, which is horrible for revenge). I also really loved the character Mr. Handsley, I wish I had a teacher like him. Ms. Champoux was hilarious as well, especially with the morning announcements.
Also, how awesome is this cover? It's brilliant, as is the hardcover (check out the my interview with Madeleine to see the hardcover).
Lowlights: The action came a little later than I thought it would, and Meghan's constant following Aimee seemed a bit odd at times. I could understand where she was coming from, and in the end, they were kindred spirits. I also really, really wanted to punch J-Bar in the face. But I think he got what was coming to him. The ending was a little disturbing, because it just made me wonder about a lot of things...
Rating: