Waiting on Wednesday is brought to us by Jill over at Breaking the Spine. 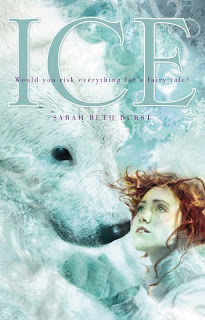 Ice by Sarah Beth Durst
Release date: October 6th, 2009
Amazon description: When Cassie was a little girl, her grandmother told her a fairy tale about her mother, who made a deal with the Polar Bear King and was swept away to ends of the earth. Now that Cassie is older, she knows the story was a nice way of saying her mother had died. Cassie lives with her father at an Arctic research station, is determined to become a scientist, and has no time for make-believe.
Then, on her eighteenth birthday, Cassie comes face-to-face with a polar bear who speaks to her. He tells her that her mother is alive, imprisoned at the ends of the earth. And he can bring her back--if Cassie will agee to be his bride.
That is the begging of Cassie's own real-life fairy tale, one that sends her on an unbelievable journey across the brutal Arctic, through the Canadian boreal forest, and on the back of the North Wind to the land east of the sun and west of the moon. Before it is over, the world she knows will be swept away, and everything she holds dear will be taken from her--until she discovers the true meaning of love and family in the magical realm of Ice.
Umm, awesome? Yes. It is. The cover is gorgeous too...I can't wait for this book!

Labels: Ice, waiting on wednesday
Email ThisBlogThis!Share to TwitterShare to FacebookShare to Pinterest