Review: OUT OF THE EASY by Ruta Sepetys 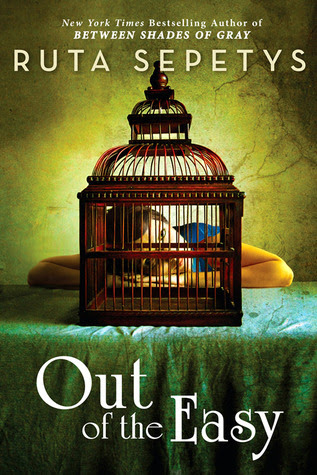 
It’s 1950, and as the French Quarter of New Orleans simmers with secrets, seventeen-year-old Josie Moraine is silently stirring a pot of her own. Known among locals as the daughter of a brothel prostitute, Josie wants more out of life than the Big Easy has to offer. She devises a plan get out, but a mysterious death in the Quarter leaves Josie tangled in an investigation that will challenge her allegiance to her mother, her conscience, and Willie Woodley, the brusque madam on Conti Street.

Josie is caught between the dream of an elite college and a clandestine underworld. New Orleans lures her in her quest for truth, dangling temptation at every turn, and escalating to the ultimate test.

I highly enjoyed Sepetys's debut novel, BETWEEN SHADES OF GRAY, so I was naturally curious and nervous when it came to her sophomore novel. Could Sepetys bring a different time and place to life with as much emotion as her debut? I was skeptical, so I kept putting off reading this story until I finally read Christina's (Confessions of a Book Addict) review and was convinced that I needed to give it a chance. Fortunately, all of my worries about this novel were soothed and erased within first few chapters. Sepetys depicts New Orleans and this story's characters richly and vividly. OUT OF THE EASY is one of those stories where you find yourself eagerly flipping the pages as the mystery unfolds. This book even proves itself to be a touching, memorable story, largely because of the exceptional characters.

I never thought I would love a book involving murder, brothels, terrible mothers, gangsters, and love triangles, but I was obviously wrong. The characters all prove themselves to be fully developed, and not quite the people you initially expect them to be. While there is a mystery to be solved within the story, I found Josie's growth and interpersonal relationships to be more fascinating. She's growing into herself, trying to decide who she is and where her future will take her. Despite everything that holds her back, she's one tough cookie and I was on Josie's side from the beginning. All in all, this is such a challenging story to review simply because it was incredible. If you love authentic historical novels, wonderful characters, coming of age moments, and a touch of mystery and romance, then you need to read OUT OF THE EASY. You won't regret it.

Highlights: The characters, the setting, the writing....Sepetys portrays everything vividly and with the right amount of authenticity. She gives readers characters to love1 and hate 2, along with settings that burst to life with each and every word. These characters make this story something special. Even the love triangle is expertly written. Plus, Josie works in a bookstore and she's a total bookworm, which makes her instantly awesome.

Cover: I like the shades of green that are used, since I don't usually see too many green covers. The symbolism is nice, too. It's a good cover, but it's not the best one I've ever seen.