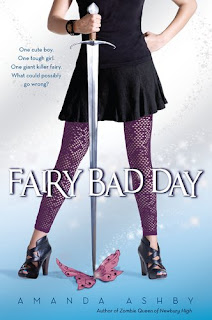 While most students at Burtonwood Academy get to kill demons and goblins, fifteen-year-old Emma gets to rid the world of little annoying fairies with glittery wings and a hipster fashion sense. She was destined to be a dragon slayer, but cute and charming Curtis stole her spot. Then she sees a giant killer fairy - and it's invisible to everyone but her! If Emma has any chance of stopping this evil fairy, she's going to need help. Unfortunately, the only person who can help is Curtis...read more at Goodreads.

Review: Fairy Bad Day is a lighthearted and charming novel that entertains from start to finish!

Written in third person, Emma Jones knows right from the beginning that she's meant to be a dragon slayer, just like her mother was...which is why she's beyond surprised and stunned when she ends up becoming the first fairy slayer ever. But Emma makes the most of it as she hunts down fairies at her local mall, while simultaneously trying to find a way to become a dragon slayer. Until, that is, a giant killer fairy steps into the picture, and she's the only the one who can see it. Well, and Curtis, the boy who took her dragon slayer spot. Now it's up to Emma, Curtis, and her BFF's Loni and Tyler to stop it before something terrible happens.

Ashby delves into this story fully, and makes sure each of her characters and settings are realistic. Especially the slayer info, from the "sight" the teens all have, the skills they need to learn, and as well as where these mystical creatures are coming from. The setting jumps from the school, the mall (where those pesky fairies hang out) and a few other places for a brief periods of time, but each felt well described. The action is exciting, and I especially loved how amusing and creative some of Emma's fairy fighting techniques were. This is definitely a quick book to read through, but it has a lot of heart. If you're looking for a light, banter-filled story with kick-butt slayers, check out Fairy Bad Day!

Highlights: Ashby made this story fun and surprisingly realistic. I love how Emma's BFF Loni is smart and useful, her stepmom isn't really that bad, and et cetera (instead of falling into cliches, Ashby made them realistic and unique from one another). Even better, I adore how her family actually knows about everything Emma's doing at her school, including the slaying. I also really love how simple Emma's "romance" is - it isn't love at first sight, just a crush that takes some time to develop.

Lowlights: Maybe a bit too obvious at times, regarding the "surprise" moments. Emma's attitude was also a bit annoying at first, but I grew to enjoy her character as she developed more.