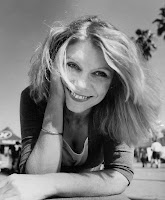 1. So what happens in Possessions?
In Possessions, a girl named Lindsey Cavanaugh arrives at Marlwood Academy, a posh boarding school high up in the mountains of Northern California, after the semester has started. She's escaping San Diego, where she had a nervous breakdown after 1) her mom died and 2) she risked everything to get into the popular clique, and lost everything, including her crush. She's feeling high strung and on display at Marlwood...and is super-ultra cautious about not crying wolf, despite the bizarre things she begins seeing and hearing--faces in mirrors, moving statues, and worst of all, the truly terrifying and evil behavior of the girls who rule the school. Lindsay learns that the girls are evil...and the vengeful spirits from over a century before are stalking the students. Then someone dies...and there's a good chance Lindsay will be next. 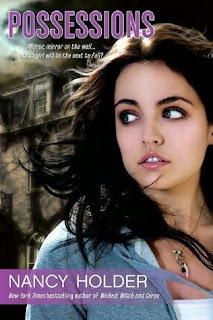 2. Where did the inspiration come from to write this novel? How long did it take you to write?
My editors at Razorbill and I talked over the concept for this book. They originally wanted to set it in Vermont, but I suggested Northern California. I live in San Diego and was born near San Francisco, and not all is sunshine and orange blossoms in Cali! It's hard to say exactly how long it took me, as I did a couple of rewrites, but I had a wonderful schedule: I would get up every morning and watch a horror movie, then start working. (I had to watch them in the daytime because I'm too chicken to watch horror movies at night!) I did this for months and if you want to know what scary movies to see, e me at nancyholder123@gmail.com, or twitter me at nancyholder, or facebook me, and I'll give you the downlow.
One of the major inspirations, though, was something that happened to me when I was about eleven or twelve. My grandfather had died, and I was visiting my grandmother. I was staying in his study, and I wasn't sleeping very well. One morning I was taking a shower in the bathroom next to the study. The shower stall had a frosted glass door. I finished taking my shower and started to open the door, when I saw a figure standing in the doorway to the bathroom. It didn't move. It just stood there. I could hear my grandmother upstairs. I tried to call out but I was so afraid I couldn't make a sound. Finally I pushed open the door...and there was no one there.
I found out later that my grandfather had died in the room I was sleeping in. I thought he had died at the hospital. When my cousin went to stay with my grandmother, she said the same thing happened to her. I think it's interesting that both of us were so scared. We both loved our grandfather very much, so if that figure was he, we weren't capable of handling it.
3. What is your main character Lindsay like, and who's your favorite character?
Lindsay comes to Marlwood to escape a terrible situation, only to find herself thrust into a worse one. Because of what she's been through, she's very self-aware. She's also very kind, and wounded. I feel for her. She's afraid she'll have another breakdown and she needs to be together to handle what's going on. She could walk away but she feels a need to protect the other girls who just don't see what's going on. I really admire her for that. I know how it feels to be the odd girl out and have to deal with everyone anyway. Lindsay fights hard and cares so much. I would love her to be my friend if I was in trouble.
I think the main character of a book is usually an author's favorite, but coming close is Miles Winters. He's the brother of Mandy, who is the ringleader of the mean girls. He's wicked sexy and brilliant and creepy and enticing. I like Miles so much that he gets a bigger role in POSSESSIONS: THE EVIL WITHIN and will really come into his own in Book 3 (as yet untitled). I also like Julie, who is Lindsay's best friend, and this crazy nonconformist named Rose. I guess there are a lot of characters in POSSESSIONS I like!
4. What are you working on right now?
Right now I'm working on CRUSADE: CONVERTED, which is the first book in a spinoff of the WICKED series, with my coauthor Debbie Viguie. It's a dark fantasy about vampire hunters, werewolves, and witches. One of the characters from WICKED anchors the series and we may have some "guest stars." We're both just loving it. I'm watching the old TV series V for inspiration. I'm also watching a lot of Spanish films--our hunters are headquartered in Salamanca, Spain. I speak some Spanish and I just love listening to it. Some friends of mine moved to Madrid so I'm e'ing and Skyping a lot with them.
5. Anything you'd like to add?
I hope everyone has a fantastic Halloween. My daughter and I go trick or treating with our dog, Panda, who has more costumes than we do. Sometimes he's a little devil, or a surfer, or a clown, and this year it looks like he's going to be a pirate, Arrrr! He carries his own treat bag in his mouth and he goes to every door with us. He only gets dog treats, no candy. (Please remember that chocolate is toxic to dogs!)
I hope that people will read POSSESSIONS during this spooky season of the year and if they like it, will help spread the word. I went through a lot writing it, lol--I watched THE RING and THE GRUDGE so many times that I have to leave the lights on in the hall and make super-double-extra sure that the TV is off. I have to reach forward to press the off button because our remote no longer works and that screen is flickering and I know that woman is crawling down the stairs...I SUFFERED and I hope I can make everyone feel a little creeped out while they're reading my book.
HAPPY HALLOWEEN!!!!!
Thanks for the interview Nancy!
Yikes, those girls from THE RING and from THE GRUDGE totally freak me out. Those movies always give me nightmares!
Visit Nancy's website to learn more about her!
- Lea
Posted by YA Book Queen at 4:41 PM