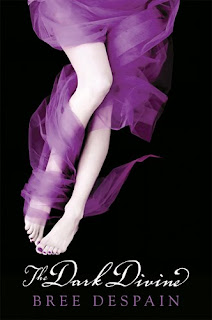 1. What can you tell us about your novel The Dark Divine, and what makes it unique?
I think one of the things that make The Dark Divine unique is that the love story is not just based on attraction, but on a long term friendship. I hope this gives the relationship between Grace and Daniel a deeper, more meaningful connection, as opposed to two people who are drawn together purely by physical attraction or some mystical force. But also...Daniel is freaking hot!
2. As your debut novel, was it difficult for you to write and what inspired you?
Well, I didn't become a debut author overnight...though it sometimes feels like it. I have spent the last several years writing and working on various projects. Writing can be so exhilarating when the story just flows, but it's also a lot of work at times.

Inspiration for the story came a stormy night as I was waiting at a stop light and a conversation between a brother and sister just popped into my head. They were discussing an old friend who had suddenly reappeared in their lives. "He's dangerous. You have to stay away from him," the brother warned his sister. I was so intrigued by this that I knew I had to figure out what was going on with these characters. I think what inspired me most as I went along were the characters themselves. Once I started to get to know Grace and Daniel, I was more and more excited to tell their story. Those two and other characters in the book were just so fun to create and write, and I find their histories fascinating. Also--chocolate. It's always good for a quick dose of rejuvenation/inspiration.
3. What is going to be next for you? Is this novel a stand alone, or the start of a series?
I'm currently working on a sequel for The Dark Divine. It is so much fun to get to spend more time with some of my favorite characters (and a few new ones). And it's also fun to get to answer a few of the questions readers will have at the end of the first book. Depending on how the sequel goes, it's possible the story could end up being a trilogy. Time will tell.
Also, I have a couple of other paranormal romance stories waiting to be written after the sequel, along with a bit more of a sci-fi romance. I also enjoy writing contemporary humorous fiction, and would love to publish in that genre someday.
Thank you for the interview Bree! I have to agree, chocolate = inspiration.
And everyone, you should check out Bree's website for a synopsis and a sneak peak of The Dark Divine. Who doesn't love a sneak peak?
-YABQ
Posted by YA Book Queen at 6:04 AM