He lives in the estate house, and she spends most of her time in the stables helping her father train horses. In fact, Savannah has always been much more comfortable around horses than boys. Especially boys like Jack Goodwin—cocky, popular and completely out of her league. She knows the rules: no mixing between the staff and the Goodwin family. But Jack has no such boundaries.

With her dream of becoming a horse jockey, Savannah isn’t exactly one to follow the rules either. She’s not going to let someone tell her a girl isn’t tough enough to race. Sure, it’s dangerous. Then again, so is dating Jack…

Highlights: Kenneally's novels are easy to breeze through in a single day. The romance is sweet, if a little frustrating a times. Having an athletic narrator who desires nothing more than to become a horse jockey is awesome - I love how Kenneally usually portrays girls who love sports, especially since those girls tend to become overlooked in literature. The romance is incredibly well done and adorably endearing. I really loved Savannah's family life too - it's a bit complicated, but at the end of the day, they try to be there for each other.

Lowlights: I'm starting to think I have some sort of character issue with Kenneally's writing style, because while I do enjoy her stories, I never fully connect to the characters or storylines.

Rating: The Royal Library, Bottom Shelf (low 4 out of 5). 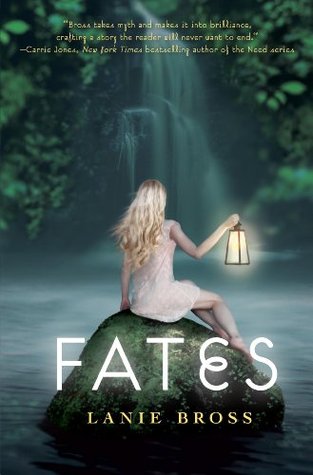 
One moment. One foolish desire. One mistake. And Corinthe lost everything.

She fell from her tranquil life in Pyralis Terra and found herself exiled to the human world. Her punishment? To make sure people's fates unfold according to plan. Now, years later, Corinthe has one last assignment: kill Lucas Kaller. His death will be her ticket home.

But for the first time, Corinthe feels a tingle of doubt. It begins as a lump in her throat, then grows toward her heart, and suddenly she feels like she is falling all over again--this time for a boy she knows she can never have. Because it is written: one of them must live, and one of them must die. In a universe where every moment, every second, every fate has already been decided, where does love fit in?

Highlights: Bross's debut exudes creative ideas, and I never quite knew what to expect from Fates because of it. The alternate worlds presented are fascinating, dangerous, and highly captivating. Corinthe's journey was especially intense and exciting, and I loved learning more about her unusual life / history as a Fate. Bross's take on mythology is familiar, yet deviates enough to generate interest.

Lowlights: I think this story was a bit too ambitious, to the point where everything became slightly confusing. The third person narration distanced me from the two narrators too much, to the point where I hardly cared about either one of them. And I definitely did not believe their romantic connection, which built too quickly (especially considering Corinthe keeps trying to kill Lucas).

Based on the classic fairy tale Beauty and the Beast, Cruel Beauty is a dazzling love story about our deepest desires and their power to change our destiny.

Since birth, Nyx has been betrothed to the evil ruler of her kingdom-all because of a foolish bargain struck by her father. And since birth, she has been in training to kill him.

With no choice but to fulfill her duty, Nyx resents her family for never trying to save her and hates herself for wanting to escape her fate. Still, on her seventeenth birthday, Nyx abandons everything she's ever known to marry the all-powerful, immortal Ignifex. Her plan? Seduce him, destroy his enchanted castle, and break the nine-hundred-year-old curse he put on her people.

But Ignifex is not at all what Nyx expected. The strangely charming lord beguiles her, and his castle-a shifting maze of magical rooms-enthralls her.

As Nyx searches for a way to free her homeland by uncovering Ignifex's secrets, she finds herself unwillingly drawn to him. Even if she could bring herself to love her sworn enemy, how can she refuse her duty to kill him? With time running out, Nyx must decide what is more important: the future of her kingdom, or the man she was never supposed to love.

Highlights: Trained from birth to kill her world's most powerful being? That's an awesome concept, and Nyx's fierce personality didn't disappoint. Nyx is a complicated heroine, who strong, scared, determined, and displays moments of anger and selfishness that remind the reader of the unfairness to her situation. The writing is lush and flows easily from one word to the next. I can honestly say this is the more creative retellings I've ever read. I was never entirely sure where this story was going to end up, and I loved how Cruel Beauty kept me curious and intrigued - which is exactly what I want a book to do.

Lowlights: I wasn't completely sold on the ending or the romance.

Rating: The Royal Library, Bottom Shelf (low 4 out of 5).