Review: THE HOST by Stephenie Meyer 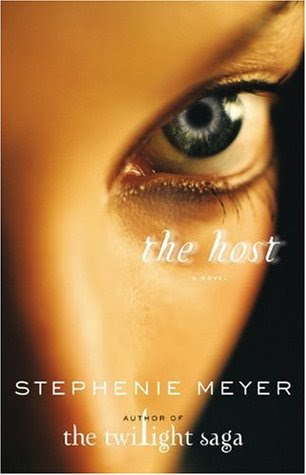 
"Melanie Stryder refuses to fade away. Earth has been invaded by a species that takes over the minds of human hosts while leaving their bodies intact, and most of humanity has succumbed.

Wanderer, the invading "soul" who has been given Melanie's body, knew about the challenges of living inside a human: the overwhelming emotions, the too vivid memories. But there was one difficulty Wanderer didn't expect: the former tenant of her body refusing to relinquish possession of her mind.

Melanie fills Wanderer's thoughts with visions of the man Melanie loves - Jared, a human who still lives in hiding. Unable to separate herself from her body's desires, Wanderer yearns for a man she's never met. As outside forces make Wanderer and Melanie unwilling allies, they set off to search for the man they both love."

I reread this book in preparation for the film adaptation1, and I was a bundle of nerves upon beginning the first few pages. I remember, in 2008, eagerly dropping by the bookstore to pick this novel up a few days after it released. I flew through those 619 pages, was sucked into another world, and enjoyed every second of it. I remember being so pleasantly surprised by how much I enjoyed this book, considering my so-and-so feelings toward the TWILIGHT series. I was so worried I would despise this novel now that I'm older, but I fortunately still found THE HOST to be thoroughly gripping and enjoyable.

Envision our world. Now imagine that we have been invaded, our bodies taken over by an alien species that is unnervingly kind and concerned about one another. Wanderer, our narrator, is one of these aliens. She's been given Melanie Stryder's body, but Melanie isn't giving up without a fight. The internal conflict between these two women could be challenging to portray, but Meyer makes it work. Meyer focuses only on a few select settings, but writes them so vividly with her descriptions that you cannot help but to envision them clearly. THE HOST gives readers a glimpse into humanity, raising questions regarding what it means to be human and what it means to be good or evil. The plot itself is nothing new for sci-fi fans, but I definitely believe this novel goes above and beyond Meyer's other works.

Highlights: Meyer writes the love triangle/square work2 perfectly. The setting is also nicely depicted, but it is the characters that take this story to another level. They are imperfect people: some angry and impulsive, while others are thoughtful and slower to act. More surprisingly, Meyer made me change my mind about them repeatedly. Characters I hated in the beginning eventually become ones I sympathized with (or even liked) by the end, and that's an impressive feat.

Lowlights: This novel is slow moving, and it takes some time to get into the story. This is a very character-focused story, so if you don't like Wanderer, you probably won't like the novel.

Note: This is an adult novel, but it has high crossover potential. I think the only aspects that make this book "adult" are the 21-year-old protagonist (Melanie's body is that age, Wanderer is older but sounds as if she is Melanie's age) and the intense, physical violence portrayed throughout the novel. Even the steamier scenes are tame in comparison to some that I've read in YA novels.

Rating: The Royal Library, Top Shelf. I loved THE HOST,  so it is going on the top shelves in the royal library where everyone can see it. I'd highly recommend THE HOST, but only to people who are willing to read a slower-paced novel that focuses heavily on characters.

1 Which I never found time to watch in theaters, thanks to a crazy-busy college semester. I did finally rent the film, though. I have many thoughts - both good and bad!
2 Don't freak out, it's not your typical love triangle/square. Upon rereading, it is obvious how the romance aspect will work out in the end. The only person with actual conflicting feelings for more than one person is Wanderer. To view my spoiler-ish comments, visit my Goodreads review.