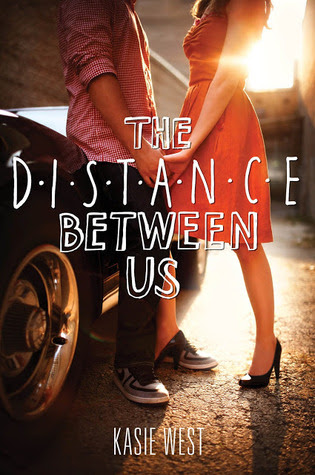 THE DISTANCE BETWEEN US
Kasie West
July 2nd, 2013

"Seventeen-year-old Caymen Meyers studies the rich like her own personal science experiment, and after years of observation she’s pretty sure they’re only good for one thing—spending money on useless stuff, like the porcelain dolls in her mother’s shop.

So when Xander Spence walks into the store to pick up a doll for his grandmother, it only takes one glance for Caymen to figure out he’s oozing rich. Despite his charming ways and that he’s one of the first people who actually gets her, she’s smart enough to know his interest won’t last. Because if there’s one thing she’s learned from her mother’s warnings, it’s that the rich have a short attention span. But Xander keeps coming around, despite her best efforts to scare him off. And much to her dismay, she's beginning to enjoy his company.

She knows her mom can’t find out—she wouldn’t approve. She’d much rather Caymen hang out with the local rocker who hasn’t been raised by money. But just when Xander’s attention and loyalty are about to convince Caymen that being rich isn’t a character flaw, she finds out that money is a much bigger part of their relationship than she’d ever realized. And that Xander’s not the only one she should’ve been worried about."

I feel like I've read a story similar to the synopsis before, but nonetheless, I am interested in this book! I'm a fan of contemporary novels, so this one is definitely on my wishlist.

"Sophie Foster thought she was safe. Settled into her home at Havenfield, surrounded by friends, and using her unique telepathic abilities to train Silveny--the first female alicorn ever seen in the Lost Cities--her life finally seems to be coming together.

But Sophie's kidnappers are still out there. And when Sophie discovers new messages and clues from the mysterious Black Swan group, she’s forced to take a terrifying risk—one that puts everyone in incredible danger.

As long buried secrets rise to the surface, it’s once again up to Sophie to uncover hidden memories—before someone close to her is lost forever.

In this second book in the Keeper of the Lost Cities series, Sophie must journey to the darkest corners of her luminous world in a sequel that will leave you breathless for more."

I thought the first KEEPER book was a fun story filled with fabulous characters, so I can't wait to see what happens next for all of them!

Labels: Exile, Kasie West, Shannon Messenger, The Distance Between Us, waiting on wednesday, WOW
Email ThisBlogThis!Share to TwitterShare to FacebookShare to Pinterest