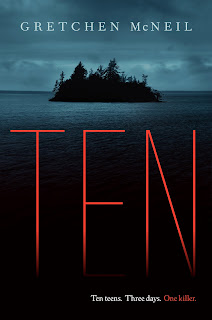 
"SHHHH!
Don't spread the word!
Three-day weekend. House party.
White Rock House on Henry Island.
You do NOT want to miss it.

It was supposed to be the weekend of their lives – three days on Henry Island at an exclusive house party. Best friends Meg and Minnie each have their own reasons for wanting to be there, which involve their school's most eligible bachelor, T.J. Fletcher, and look forward to three glorious days of boys, bonding, and fun-filled luxury.

But what they expect is definitely not what they get, and what starts out as fun turns dark and twisted after the discovery of a DVD with a sinister message: Vengeance is mine.

Suddenly, people are dying, and with a storm raging outside, the teens are cut off from the rest of the world. No electricity, no phones, no internet, and a ferry isn't scheduled to return for three days. As the deaths become more violent and the teens turn on each other, can Meg find the killer before more people die? Or is the killer closer to her than she could ever imagine?"

It's the party everyone would kill to be at...and one that may kill you if you attend. Thrilling, horrifying, and strangely entertaining, TEN is a highly suspenseful murder mystery that is nearly impossible to set aside for even a second. The third person narration follows Meg, a sarcastic teenage writer who was dragged along to an exclusive party by her codependent BFF, Minnie. While I never felt a deep connection with Meg, I was rooting for her to survive from the beginning and was eagerly trying to unravel the clues right alongside her. Simply put, TEN is the type of story that will keep you up late at night reading, anxiously turning the pages and warily eyeing every shadowy corner in your home1.

Highlights: I was both correct and incorrect about the killer's identity, so I found that to be a pleasant surprise. There is plenty of diversity among the characters, and I like that McNeil didn't follow the typical horror movie pattern entirely. All in all, TEN is one thrilling mystery.

Lowlights: Neither the characters nor the romance are deep or complex, but that didn't bother me (I feel like this story is meant to be a quick, exciting read rather than deep or emotional). It takes a few chapters for things to get going. A few of the murders seemed a bit convenient (the killer had to get really lucky a few times in order for the right person to fall into the correct trap).

1 Probably not a good idea to read this one at night, like I did. I don't scary easily, but even I had a hard time falling asleep after reading this one (especially since my house makes creepy creaking noises at night - which so didn't help the situation). *cuddles with flashlight*