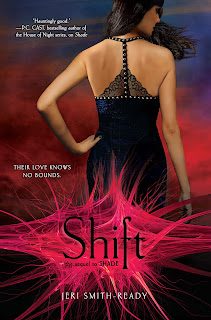 
Aura’s life is anything but easy. Her boyfriend, Logan, died, and his slides between ghost and shade have left her reeling. Aura knows he needs her now more than ever. She loves Logan, but she can’t deny her connection with the totally supportive, totally gorgeous Zachary. And she’s not sure that she wants to.

Logan and Zachary will fight to be the one by her side, but Aura needs them both to uncover the mystery of her past—the mystery of the Shift.

As Aura’s search uncovers new truths, she must decide whom to trust with her secrets…and her heart.

Sexy, mysterious, exciting and filled with surprises - Shift has it all. The story begins with Aura being a bit (okay, extremely) bummed out regarding what happened to Logan previously. It isn't until a few chapters later where the Aura that I adore comes back - her sarcastic humor never ceased to amuse me. But, there are still of troubles, whether it's with boys or even with the DMP. Smith-Ready excels at creating genuine and honest chemistry (both friendship-wise and romantic) between characters, but only one of the lovely guys who adores Aura truly fits with her the best, and I loved seeing this relationship grow.

In between typical (and not so typical) teenage drama lies a mystery that will captivate readers entirely. The significance of Aura and Zachary's births, Aura's mother, The Shift, Stonehenge, one downright shocking secret, and so much more....the closer Aura came to discovering everything, the more hooked on the story I became.

Shade delivered compelling and realistic characters, Shift came through with plenty of seductive secrets, and I have no doubt that Jeri Smith-Ready is going to give readers something spectacular with the next novel,  Shine.

Highlights: Many of the characters grew in this installment. And Smith-Ready made a kilt sexy...which I didn't think was possible. Smith-Ready ends the story nicely, but leaves quite a few tantalizing hooks to keep readers curious for the third novel1. All in all, these books are must-reads, so go check out the first novel if you haven't already!

Lowlights: Despite the incredible chemistry2, the boy drama got to be a bit much every now and then. I wanted to shake some sense into quite a few characters!

Other reviews in this series:
Shade (Shade #1)


1 No joke. I'm dying to know what happens next. I would consider trading my sibling for a copy of Shine, and I'm fairly sure that wouldn't be entirely legal.
2 And yes, there are plenty of super-sexy moments. And a couple might be for more mature teens.