The Eternal Ones by Kirsten Miller 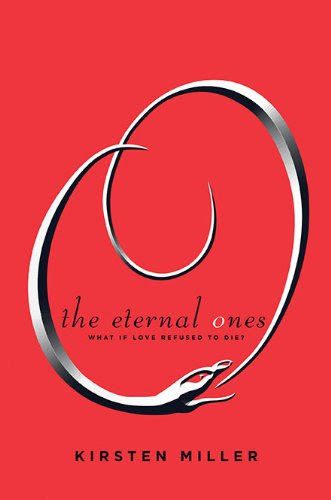 Haven Moore is as normal as can be...well, except for the whole seeing visions from the past thing. Visions that usually include a young man named Ethan. Her entire hometown is convinced that she has a demon inside of her, or worse.

When things unravel at home, Haven runs off to New York City in search of the person she thinks used to be Ethan. The person she's in search of? None other than rich and famous Iain Morrow, who has quite a controversy surrounding him. She also seeks out the mysterious Ouroboros Society in hopes that they can help her with her past visions.

Mysterious and intriguing, The Eternal Ones is nothing like I expected.

With an idea like reincarnation, The Eternal Ones was bound to be interesting. The story doesn't seem to truly begin until Haven runs of to NYC, and that's when everything really gets going. The description of the cities and scenery are wonderful, it's easy to visualize the different places Haven travels. The characters are all intriguing and unique from one another (and some were downright amusing, I wish a few had made more of an appearance).

Yet, the story fell a bit flat for me. The romance wasn't believable to me. I was excepting an epic romance through the ages, and got more of a mystery (but I do love mysteries), with a romance that seemed so sudden and quick. I didn't really see the attraction between Haven and Iain, and it frustrated me to see how quickly Haven changed her mind about him (repeatedly). I don't think this book is perfect, but it was fun to read for the mystery aspect.

Highlights: The ideas were intriguing, and the description is fantastic. The scenery came alive with each of Miller's words. I was a bit surprised at the end too, with one of the revelations made about another character. I still can't believe I didn't see it coming!

Lowlights: I think my biggest complaint would have to be Haven. Haven starts out interestingly enough, strong, independent, and does what she wants. However, by the time she meets Iain, it's like a personality makeover. She's naive and will literally believe anything anyone says to her (and therefore spends a lot of time switching between different theories about who she should trust and whatnot). I think someone could have told her the sky was neon green today, and she'd believe them. I wanted her to have a bit more backbone like she did in the beginning, and to think logically, not just believe the random person you just met.