Interview: Once a Witch by Carolyn MacCullough 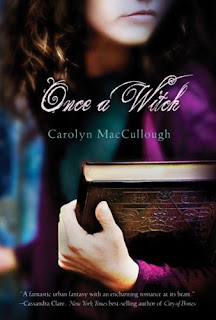 1. What happens in your novel ONCE A WITCH?
Once a Witch centers on a 17 year old girl, Tamsin Greene, who comes from a long line of witches. But she herself has no magical Talent--what makes matters worse is that when she was born her grandmother predicted that she would be the most powerful witch of all. However, all that changes when one rainy August evening, a mysterious stranger approaches her in her grandmother's bookshop and asks for her help. Suddenly, she finds herself on a quest through time and in a whole lot of danger!
2. What is your main character Tamsin like?
She's prickly! She loves her family, but feels like a complete outsider and so she holds them at arm's length.
3. What are some of the characters "Talents"? Are they all different?
Tamsin's older sister Rowena can compel anyone to do anything she wants just with the power of her voice. Tamsin's grandmother can see the future. Tamsin's mother can move at warp speed and Tamsin's father controls the weather.
4. How much research did you do for Once a Witch?
A fair amount. There are two episodes of time travel in the story so I wanted to get the period details right.
5. Was there any inspiration behind writing Once a Witch?
All of my books start with the main character talking to me, telling me their story. This book was no different.
6. How long did it take you to write Once a Witch, and did it turn out the way you expected it to?
It took about a year and a half to get it where I wanted it before my editor took it on. After she acquired it, it went through many more rounds of revision! And I think books never quite turn out the way you expect them to--maybe they just turn out the way they need to.
7. Were there any favorite bits to write in this novel?
Oh, the banter between Tamsin and Gabriel (her childhood friend/love interest) was so fun to write!
8. Anything else you'd like to add?
Come visit me at www.onceawitch.com to learn more about the book!
Thanks so much Carolyn!
-YABQ
Posted by YA Book Queen at 3:26 PM

Labels: Once a witch, Talents, witches
Email ThisBlogThis!Share to TwitterShare to FacebookShare to Pinterest