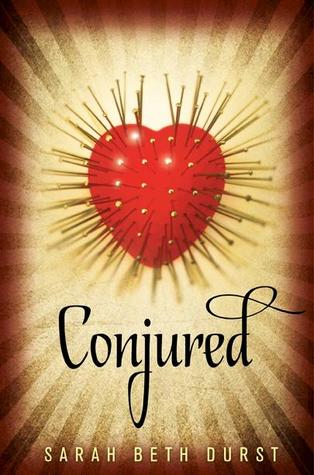 
Eve has a new home, a new face, and a new name—but no memories of her past. She’s been told that she's in a witness protection program. That she escaped a dangerous magic-wielding serial killer who still hunts her. The only thing she knows for sure is that there is something horrifying in her memories the people hiding her want to access—and there is nothing they won’t say—or do—to her to get her to remember.

At night she dreams of a tattered carnival tent and buttons being sewn into her skin. But during the day, she shelves books at the local library, trying to not let anyone know that she can do things—things like change the color of her eyes or walk through walls. When she does use her strange powers, she blacks out and is drawn into terrifying visions, returning to find that days or weeks have passed—and she’s lost all short-term memories. Eve must find out who and what she really is before the killer finds her—but the truth may be more dangerous than anyone could have ever imagined.

Conjured is undoubtedly like nothing you've read before. The narration twists and shifts between different perspectives from Eve (her normal 3rd person POV, flashbacks in 1st person, and eventually, the novel shifts from 3rd to 1st person) as she attempts to come to terms with her current life in the paranormal witness protection program. But, she is haunted by memories of a twisted circus, a murderous magician, a terrifyingly captivating storyteller. None of her memories make the slightest bit of sense to her. To top it off, her peculiar abilities, when used, sometimes cause her black out and lose track of her recent memories, making it difficult to know who to trust and who is lying to her.

Durst continues to impress me with every story she writes. Her work always includes highly impressive and imaginative storylines, and Conjured is no exception. Eve's point-of-view is odd, peculiar, and the mystery surrounding her and the other characters in the paranormal witness protection program is a thrill to unravel. While I was not completely sold on the romance, the mystery and descriptive writing style make this a challenging story to set aside. With so much paranormal young adult literature, it can be difficult to differentiate between books, but this is one story that truly stands out. Darkly mysterious and eerily entrancing, Conjured is a dazzling tale that will surprise you in more ways than one.

Highlights: The twisted circus memories and realities kept me hooked. I was unable to guess the truth about Eve's origins, even though the hints were presented early on. This would be a fun book to reread, if only to see all of these hints again. Durst develops a fully realized world, both our "normal" world and the worlds in Eve's memories. The writing is lyrical at times, and wonderfully vivid.

Lowlights: The romance is underwhelming and very quick to form (or perhaps it only felt that way simply because of Eve's memory issues).


Rating: The Royal Library, Middle Shelf. Conjured is an eerily fantastic story that is worth owning, and  it has earned a spot in the royal library. I enjoyed Conjured very much, despite a one or two small issues, and would highly recommend this eerily magical story to other readers.