Highlights / Lowlights: IN THE SHADOW OF BLACKBIRDS by Cat Winters 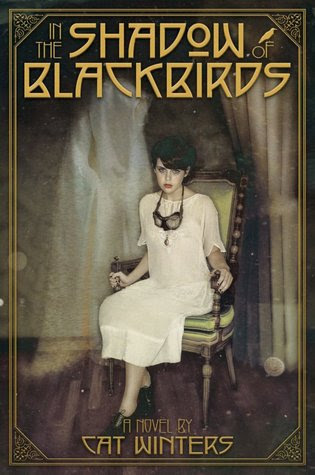 Title: IN THE SHADOW OF BLACKBIRDS


In 1918, the world seems on the verge of apocalypse. Americans roam the streets in gauze masks to ward off the deadly Spanish influenza, and the government ships young men to the front lines of a brutal war, creating an atmosphere of fear and confusion. Sixteen-year-old Mary Shelley Black watches as desperate mourners flock to séances and spirit photographers for comfort, but she herself has never believed in ghosts. During her bleakest moment, however, she’s forced to rethink her entire way of looking at life and death, for her first love—a boy who died in battle—returns in spirit form. But what does he want from her?

Featuring haunting archival early-twentieth-century photographs, this is a tense, romantic story set in a past that is eerily like our own time.

Highlights: Mary Shelley Black1 is smart, sharp-witted, independent, and completely fabulous as a narrator. She's not some weak-willed girl, and I adored her for that aspect of her personality. The conclusion was mostly a surprise, and even though I did guess a few small aspects, Winters threw a few more twists my way. The importance of family was wonderful, especially Aunt Eva's presence throughout the story. Even the very bittersweet romance was nicely portrayed. The ghost aspect was entirely different than what I assumed it would be, which caused this novel to become a very refreshing story. All in all, IN THE SHADOW OF BLACKBIRDS is likely incredibly different from what you may expect, and completely worth your time.

Lowlights: I set it aside for a few weeks after reading a couple chapters. While there were many interesting moments, I was never 100% compelled to read straight-through. But, I was probably in a book slump at that time.

Rating: The Royal Library, Middle Shelf. A wonderfully descriptive historical novel featuring a fabulous main character, IN THE SHADOW OF BLACKBIRDS is worth checking out.

1 My gosh, her name is a mouthful (but still a very awesome literary name and a nice nod to Mary Shelley, the author of Frankenstein).