Review: DARE YOU TO by Katie McGarry 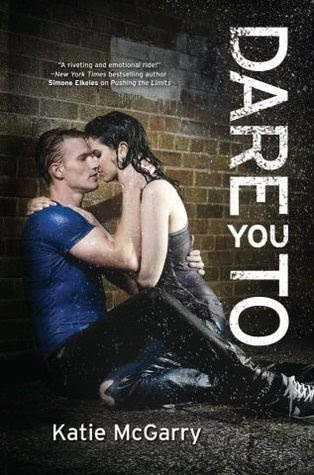 If anyone knew the truth about Beth Risk's home life, they'd send her mother to jail and seventeen-year-old Beth who knows where. So she protects her mom at all costs. Until the day her uncle swoops in and forces Beth to choose between her mom's freedom and her own happiness. That's how Beth finds herself living with an aunt who doesn't want her and going to a school that doesn't understand her. At all. Except for the one guy who shouldn't get her, but does....

Ryan Stone is the town golden boy, a popular baseball star jock-with secrets he can't tell anyone. Not even the friends he shares everything with, including the constant dares to do crazy things. The craziest? Asking out the Skater girl who couldn't be less interested in him.

But what begins as a dare becomes an intense attraction neither Ryan nor Beth expected. Suddenly, the boy with the flawless image risks his dreams-and his life-for the girl he loves, and the girl who won't let anyone get too close is daring herself to want it all....

Like some other people who read McGarry's debut, I was surprised to find that Beth was going to have her own story – and one that did not involve Isaiah as her main love interest. In addition, I was amazed that McGarry chose to write from Beth's POV. In PUSHING THE LIMITS, Beth was hardly an enjoyable or endearing character, so I was a bit nervous when I started DARE YOU TO. Yet, right from the start, McGarry proves there is more to Beth than her rough, don't-f%#$-with-me exterior. Even Ryan, the seemingly Mr. Perfect baseball star who provides the second narration in this novel, proves there is more to him than how fast he can throw a baseball.

In the beginning of the story, Beth says that she is a piece of a puzzle that never quite fits in. Her words are fitting, because when it comes to Beth and Ryan, they are two puzzle pieces – they're shaped differently, but they still somehow manage to fit together perfectly. Even as their personalities clash and challenge one another, Beth and Ryan simultaneously bring out the better qualities in each other. And, as in any good book, the collision of these two different characters begins with a simple dare, which complicates everything for both of them. Filled with electric tension, surprising secrets, and tantalizing drama, DARE YOU TO is an exceptional story. If you're hesitating when it comes to checking out this story, I dare you to read this book – you won't regret it.

Highlights: McGarry brought two very different characters together and made their relationship believable and worth rooting for. Beth and Ryan's voices were distinct, nearly impossible to confuse, and they proved to be layered characters. Side characters were fantastic, especially Lacy and Uncle Scott. I especially enjoyed the mystery behind what was going on in Beth's mother's home. As a whole, characters were wonderfully written.

Lowlights: The story became a bit soap-opera-dramatic a few times. I wish McGarry would have written more about Beth and her Uncle Scott, it would have been nice to see them bond a bit more on page instead off the page.

Notes: Cursing (mostly by Beth), hot-and-steamy moments, mentions of safe sex, mentions of drugs/drug use, and physical abuse. Also, if you take the book jacket off the book so no one will know that you're reading a kissing book, think again. A slightly different version of the cover is printed on the actual book, so you'll just have to bravely read it and ignore the people who stare. Also, you do not need to read PUSHING THE LIMITS in order to understand this novel (you do get to see the two narrators from that novel appear in this story, which is always fun).

Rating: The Royal Library, Middle Shelf. DARE YOU TO is fantastic, worth owning, and has earned a spot in the royal library. I enjoyed this story very much, despite a few small issues here and there, and would recommend this book to other readers.

My reviews of other novels by Katie McGarry:
PUSHING THE LIMITS