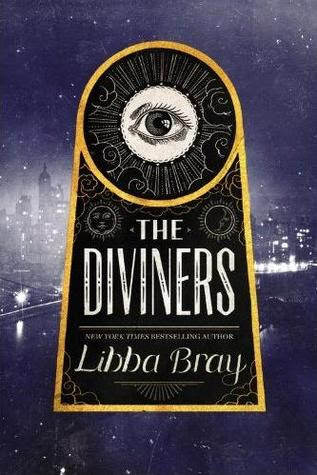 
Evie O'Neill has been exiled from her boring old hometown and shipped off to the bustling streets of New York City--and she is pos-i-toot-ly thrilled. New York is the city of speakeasies, shopping, and movie palaces! Soon enough, Evie is running with glamorous Ziegfield girls and rakish pickpockets. The only catch is Evie has to live with her Uncle Will, curator of The Museum of American Folklore, Superstition, and the Occult--also known as "The Museum of the Creepy Crawlies."

When a rash of occult-based murders comes to light, Evie and her uncle are right in the thick of the investigation. And through it all, Evie has a secret: a mysterious power that could help catch the killer--if he doesn't catch her first.

Highlights: Libba Bray books tend to be either a hit or a miss with me, so I was a bit anxious when I left my local library with the behemoth that is THE DIVINERS. But, it fortunately did deliver the eerie read I was promised. Atmospheric and rich in details, THE DIVINERS features a diverse cast of characters, a captivating mystery, and a wonderfully depicted setting. In addition, Bray knows how to write with humor, which allows a nice balance in regard to the horror aspect of the novel. Plus, it's written in 3rd person POV (which, obviously, I love)!

Lowlights: THE DIVINERS reads like a long book. It feels long, and certain moments seem utterly unnecessary. In the end, it doesn't seem like enough is accomplished, especially when taking into consideration the amount of "main" characters the story features. I probably would have loved this story more if it had narrowed it's focus to only one or two main characters.

In the end, I would give THE DIVINERS a 3.8 out of 5 rating – I really, really liked it, but I also had a few issues with this novel. If you're looking for an eerie, historical novel with a large cast of characters, this book is perfect for you!