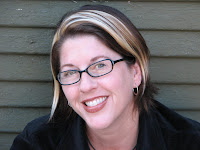 Today I have Cynthia (or CJ) Omololu here to talk about her newest novel, Dirty Little Secrets (out now). And I also attempt to learn her dirty little secrets, but fail ;)

1. What's your new novel Dirty Little Secrets about?
Dirty Little Secrets is about Lucy, a sixteen-year-old girl who comes home one morning to find her mother dead under a stack of National Geographics in their hoarded home. As she starts to dial 911, she looks around at the piles of garbage that scrape the ceiling. She doesn't notice the mountains of junk or the rotting smell anymore, but the fireman will. And after that will come the news cameras. No longer will they be the nice oncology nurse with the lovely children, but that freaky garbage family on Collier Avenue. Having spent her life keeping people out of their garbage-filled home, Lucy finally has a normal life - and maybe even a boyfriend - within reach, and she realizes that all of that will come crashing down around her as soon as the world learns the truth.
With no way to save her mother and no one to help her, Lucy has to decide - how far will she go to keep the family secrets safe?
2. Where did the inspiration to write this novel come from?
I got the idea from a magazine article that was written by the adult child of a hoarder. She talked about growing up with no friends and having to hide how they lived from everyone. I started to wonder what it would be like to grow up in a hoarded home and the idea just took off from there. It did take awhile to find the right voice and format for the book.
3. What was the hardest part to write in Dirty Little Secrets? Was it difficult to know what it's like living in a hoarded home when you did not grow up in in?

The hardest part for me to write was the ending. I originally went in a completely different direction, but I had some fantastic help from some people who grew up in a situation like Lucy's and they very strongly suggested the ending we ultimately used. After I finished it in one mammoth writing session, I realized that no matter how difficult or controversial, it was really the only possible way for Lucy's story to end.
It's true, I didn't grow up in a hoarded home, but I have known several hoarders over my lifetime so it wasn't very difficult to put myself into Lucy's situation. I also had help from several people associated with teh website Children of Hoarders who were amazing. They shared their experiences and read bits and pieces of the book - and weren't afraid to tell me when I got details wrong. There has been a lot of coverage of hoarding in the media lately - A&E has an entire series called Hoarders, so I think that people are more familiar with the disorder now than when I wrote the book a little over a year ago.
4. Do you have any dirty little secrets?
Of course - doesn't everyone?
5. What's next for you?
I love writing YA and I have several possible "next books" up my sleeve. I'm currently revising another manuscript that I love with a race as a central theme, so we'll see if that one finds a good home.
6. Is there anything else you'd like to add?
One thing I'd like people to take away from Lucy's story is that no matter how lonely you feel, you are never truly alone. You may think that nobody understands what you are going through, but the amazing thing is that once you open up and start talking about it, you find that so many other people have had similar experiences. Once I started talking about hoarding, it seemed like everyone had a friend or relative who suffered from the disorder and had a story to tell. I hope that DLS can get a few people talking about their situations and allow them to reach out for help if they need it.
Thank you for the fabulous interview, Cynthia!
Review will be posted tomorrow, but I have to say, Dirty Little Secrets was awesome!