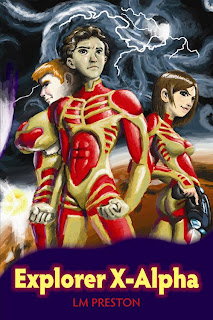 For most kids, a trip to space camp is the trip of a lifetime, for Aadi it was life altering. After receiving a camp immunization needed for travel to Mars, Aadi finds that the immunization is the catalyst of an insidious experiment. He realizes what is happening too late for a change of fate. The full experiment is set in motion when he and his co-pilot, Eirena, crash in a distant galaxy called Shrenas, where they change and realize the full extent of their power. This turn of events forces him to grow up quickly, accept his change, and to decide to save a world, or to do what he was trained to do, dominate it. His power is coveted by the warring leaders of Shrenas, and he is forced to choose sides, a decision that may prove just how much humanity he has left.

Review: Explorer X - Alpha was a fun adventure, but it had it's flaws.

The characters are strong and brave, but not all of them are (which I found to be a relief, and quite humorous at points). At first, I was a bit put off by Aadi, but soon grew to enjoy his character (and adore Ebu!), but I found myself really wanting to know more about a few other characters, like Tacitus. Eirena and Raiko were awesome female characters, although I preferred Raiko over Eirena, because I found Eirena's attitude to be insufferable.
Once the real action starts, the story grasped me and drew me in. In the end, I was pleased with what we found out, but left curious about a few more things (which is good, considering this is only the first novel). I wish I could say more, but then I would be spoiling the plot!
Highlights: Once the reader finally learns the secrets regarding this space camp, the story seems to really kick into action. Plus, by that time, I really was enjoying the characters. The action was addictive, and I loved how even the girls could totally kick butt. I love the world L.M. created, but I want to see more.
Lowlights: The worst part to the novel would have to be it's dialog. At times, it felt odd, and the characters only sounded like the children they were when they were insulting each other. The author rarely used contractions (instead choosing to say "I did not" instead of the simpler, more child-like "I didn't"), and so at times I found it a bit awkward. Even the narrative seemed a bit stiff at times.