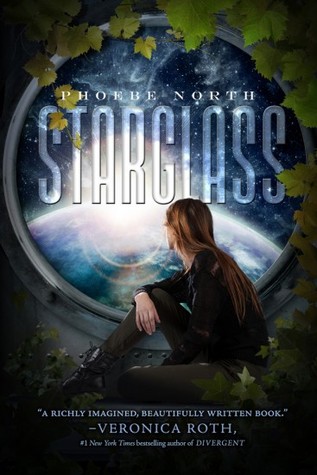 
Terra has never known anything but life aboard the Asherah, a city-within-a-spaceship that left Earth five hundred years ago in search of refuge. At sixteen, working a job that doesn't interest her, and living with a grieving father who only notices her when he's yelling, Terra is sure that there has to be more to life than what she's got.

But when she inadvertently witnesses the captain's guard murdering an innocent man, Terra is suddenly thrust into the dark world beneath her ship's idyllic surface. As she's drawn into a secret rebellion determined to restore power to the people, Terra discovers that her choices may determine life or death for the people she cares most about. With mere months to go before landing on the long-promised planet, Terra has to make the decision of a lifetime--one that will determine the fate of her people.

Highlights: The world of the Asherah, the spaceship traveling to a new planet called Zehava, was nicely developed and highly enriched with culture and religion. This society is both intriguing and subtly terrifying. Terra is a fascinating protagonist who made me love and hate her at the same time, which is always fascinating to read. Relationships between characters kept me hooked, both positive and negative ones. North makes STARGLASS unique, keeping her readers on their toes by having the story wander off in new directions. While certain aspects of the romance were easy to see coming, I enjoyed how complicated both romantic situations proved to be. In the end, the world and characters of STARGLASS are fascinating, and I will definitely be looking forward to finding out what happens next.

Lowlights: The slow pacing of this story is a bit difficult to adjust to – for the most part, not a lot happens. There's a lot of focus on Terra's very complicated "love" life and her work life (I enjoyed the latter a bit more, mostly because I think Mara is a fabulous character). The distorted religious aspect confused me for most of the book. I think the biggest problem was that the interesting part of the story came too late, and it took too long for Terra to "fulfill" her end of the bargain. My spoiler-ish comments can be viewed on Goodreads.


Rating: The Great Hall. (aka, 3.7 out of 5). STARGLASS was very likable, enough that I want a copy somewhere in the palace, even if it doesn't earn a spot in the royal library (perhaps I'll get it as an eBook, if it's on sale). YA sci-fans who are looking for a story that travels in unexpected directions should check out STARGLASS, because you will definitely be in for a surprise.