Review: THE TESTING by Joelle Charbonneau 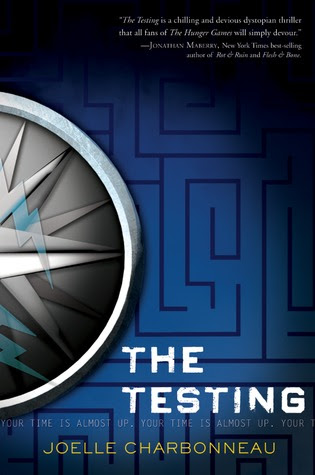 
"Keep your friends close and your enemies closer. Isn’t that what they say? But how close is too close when they may be one in the same?

The Seven Stages War left much of the planet a charred wasteland. The future belongs to the next generation’s chosen few who must rebuild it. But to enter this elite group, candidates must first pass The Testing—their one chance at a college education and a rewarding career.

Cia Vale is honored to be chosen as a Testing candidate; eager to prove her worthiness as a University student and future leader of the United Commonwealth. But on the eve of her departure, her father’s advice hints at a darker side to her upcoming studies--trust no one.

But surely she can trust Tomas, her handsome childhood friend who offers an alliance? Tomas, who seems to care more about her with the passing of every grueling (and deadly) day of the Testing. To survive, Cia must choose: love without truth or life without trust."

Only the best and brightest are selected for the Testing. Cia's father was selected as a teen, but no one from the Five Lakes colony has been deemed worthy for quite some time. But then Cia and three classmates are chosen, and are swept off to Tosu city for the Testing. As Cia struggles to pass and survive the Tests – mental, physical, alone and as a team – she also battles with her feelings toward her friends, and the warning her father gave her before Cia left home. In the Testing, sabotage is fair game, and no one can be trusted....

Gritty and even a bit disturbing at times, THE TESTING introduces a world that is attempting to rebuild itself by using only the best of the best as its leaders. But, the selection process is pure hell. Seemingly normal in the beginning, the tests quickly take on a sinister aspect and become downright deadly as the Testing narrows down the pool of candidates. While there is a small and realistic budding romantic subplot, THE TESTING's biggest strength is its eerie and disquieting world, along with Cia's no-nonsense, highly observant narration. THE TESTING is a fascinating story, and I'm eager to see what happens next in the sequel.

Highlights: Everything begins innocently enough, before Charbonneu slowly reveals the deadly nature of the Testing. Despite the futuristic setting, Cia's narration keeps this story grounded in reality. She's a smart girl, and it's nice to have a heroine who is willing to think for herself, instead of relying on other characters to do everything for her. I'm always fascinated by novel's that delve into the crazy things people will do in order to win or survive, so I found that aspect intriguing.

Lowlights: Parallels to THE HUNGER GAMES (strange and dangerous humanoid mutant creatures) and BATTLE ROYALE (kids killing other kids in order to win and survive in an arena of some sort, which is also an HG parallel), but that didn't really bother me. I'm mostly concerned about why – why do the officials allow so many candidates to die? Even ones who are exceptionally brilliant, but were fooled by more malevolent characters? Do they really want sneaky, evil people to control their families futures? While Cia speculates on this, the answers provided are not satisfactory or even logical - realistically, it's counterproductive to let your nation's best and brightest die. I'd also like to know more about the world. Hopefully the sequel will provide more answers.

Received a digital advanced review copy from publisher in exchange for my honest review.