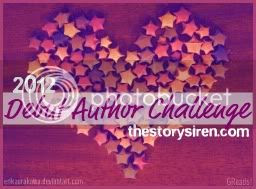 CHALLENGE OBJECTIVE
To read & review a minimum of twelve young adult or middle grade debut novels between the dates of January 1, 2012 - January 31, 2013.
For more info, go to The Story Siren!

Bold Link - own/borrowed, read and reviewed
Bold Italics - read and needs review
Italics - own or borrowed, to read and review
Normal - want to read
1. Everneath by Brodie Ashton
2. Never Eighteen by Megan Bostic
3. Tempest by Julie Cross
4. Cinder by Marissa Meyer
5. Harbinger by Sara Wilson Etienne
6. The Vanishing Game by Kate Kae Meyers
7. Article 5 by Kristen Simmons
8. Under the Never Sky by Veronica Rossi
9. Born Wicked by Jessica Spotswood
10. Where it Began by Ann Redisch Stampler
11. The Selection by Kiera Cass
12. Immortal City by Scott Speer
13. Struck by Jennifer Bosworth
14. Something Strange and Deadly by Susan Dennard
15. Meant to Be by Lauren Morrill
16. Level Two by Lenore Appelhans
17.
This will be my third time participating, and I am excited! It looks like 2012 is going to be an awesome book year :)