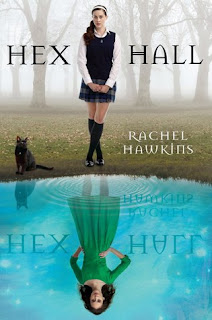 WOW is hosted by Jill over at Breaking the Spine.

Book: Hex Hall
Author: Rachel Hawkins
Release Date: March 2, 2010
Summary: When Sophie Mercer turned thirteen, she discovered that she was a witch. It's gotten her into a few scrapes. Her non-Gifted mother has been as supportive as possible, consulting Sophie's estranged father--an elusive European warlock--only when necessary. But when Sophie attracts too much human attention for a prom-night spell gone horribly wrong, it's her dad who decides her punishment: exile to Hecate Hall, an isolated reform school for wayward prodigium, a.k.a. witches, fae, and shapeshifters. By the end of her first day among fellow freak-teens, Sophie has quite a scorecard. Three powerful enemies who look like supermodels; a futile crush on a gorgeous warlock; a creepy, tag-along ghost; and a new roommate, who happens to be the most-hated person and only vampire on campus. Sophie soon learns that a mysterious predator has been attacking students, and her friend Jenna is the number one suspect. Meanwhile, Sophie has a more personal shock to grapple with. Not only is her father head of the prodigium council, he's the most powerful warlock in the world, and Sophie is his heir. As a series of blood-curdling mysteries starts to converge, Sophie prepares for the biggest threat of all: an ancient secret society determined to destroy all prodigium, especially her.

Wow is right! I cannot wait for this one!