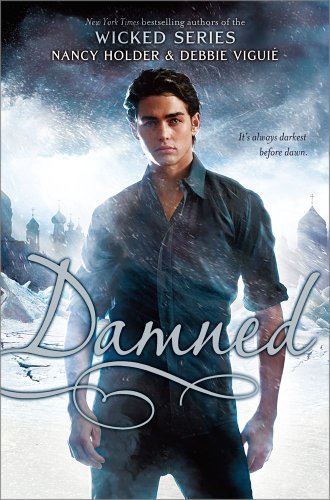 
There is a fine line between love and sacrifice...

Antonio would do anything for his beloved fighting partner Jenn. He protects her, even suppresses his vampire cravings to be with her. Together, they defend humanity against the Cursed Ones. But tensions threaten to fracture their hunting team and his loyalty—his love—is called into question.

With an even more sinister power on the rise, Jenn must overcome her personal vendettas. Antonio and Jenn need each other to survive, but evil lurks at every turn. With humanity’s fate hanging in the balance, they must face down the darkness…or die trying.

With an action-packed storyline and a few heartbreaking twists, Damned is simply thrilling.

Jenn1 is officially the leader of the Salamanca team of hunters, but everyone in the resistance may be in over their heads as the risks grow higher. Vampiric control over the world is strengthening, the resistance is growing difficult to continue, allies are running low, and one of vampires has even begun manufacturing a surprise that could bring the downfall to humans everywhere. But even as Jenn and her team attempt to save humankind, they have to face their own personal demons. The more they try to fight and defend humanity, the closer they come to winning – or losing – everything.

Damned grows more intense and gripping by the page. Even though it's the second novel, Holder and Viguié recapped the events of the previous story while simultaneously moving forward with the sequel. Many characters are faced with new and old struggles to overcome. The 3rd person narrative gives great insight into each character, and some of the things you'll learn about them will surprise you. Damned is fast-paced, shocking, and filled with vicious vampires – can you ask for anything better?

Highlights: Damned surprised me, with both character growth, and even with who became a casualty of war. Internal/personal struggles with each character became more important to the story. Insight given to certain characters – like Aurora2, Eriko, Heather, Holger – was interesting, and it gave many of them more depth to their personalities. And as always, Holder and Viguié deliver when it comes to epic battle scenes, as well as touching (maybe even heartbreaking) moments between characters.

Lowlights: Two new characters needed a bit more development, because by the end, I felt like they just blended into the background. I'm also not a fan of whenever Jenn and the gang split up, because it's more difficult to keep track of what's going on when they're separated.

My other reviews in this series:
Crusade

1 Jenn really surprised me with her growth, she's stronger and assertive for most of the book...go Jenn!
2 I loved all the parts focusing on Aurora - she's one badass vampire.